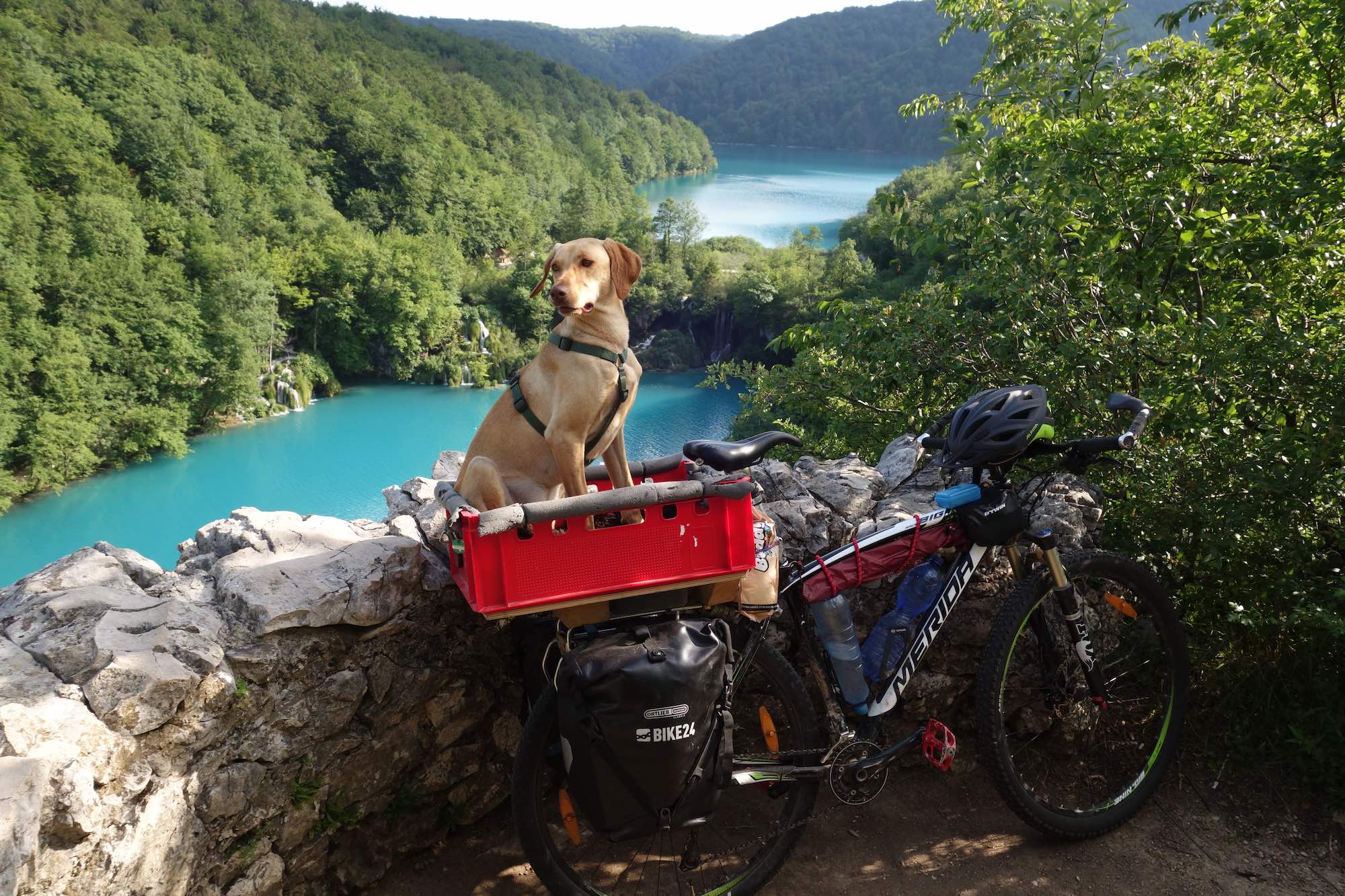 Biking from Austria to Croatia

Post lockdown bike travels from the mountains to the sea.‍

We were luckier than most when the world went into Lockdown. We were ‘stuck’ at beautiful MoaAlm, high in the Austrian Alps, with no people for miles around. We had wonderful remote hiking on our doorstep and a yoga studio where we could stretch, dance and work out each day. As the lockdown began to ease, we also found we were located in probably one of the freest corners of the world when it came to travel during Corona times.

After three months of seclusion in our mountain hideaway, we knew we wanted to get out and explore. We had lots of time before the start of the summer season and we were ready for adventure. We considered a long distance hike, but it was still early May, there was lots of snow and the weather was not particularly great. We don’t own a car so our final option was bicycles. We decided we would try our very first cycle tour, and explore the country that has been our home for nearly two years. If the borders opened then we would head south.

We spent two weeks preparing our mountain bikes for long distance travel. The first problem was working out how to carry Szuka, our energetic young dog, on the bikes. Although she is incredibly fit, it would not be viable for her to run more than 30km per day, and we did not really want her running on tarmac or on steep downhills. We started with Craig’s idea, a child seat turned into a dog carrier and replaced it with a full pannier rack complete with a dog box. Fully loaded and with our trusty companion and ukulele player, Ligita in tow we headed for the SalzKammergut region.

The Salzkammergut area in Austria is famous for two things: lakes and rain. Neither disappointed us. After completing our first long alpine pass over Mallnitz to Bad Hofgastein, we cycled North into the Austrian lake district. Lake Hallstatt was our first destination. Usually overrun with tourists, receiving over four million per year, the tiny town was empty and we set up camp on the banks of the lake, something that would be inconceivable normally. We spent our days swimming and chatting to local fishermen and farmers who were relieved that there was a break in the crowds.

From Hallstatt we cycled to the wilder Grundlesee then headed North hoping to make it to more lakes in time for Lottie’s birthday. That plan was foiled by what can only be described as a storm of Biblical proportions which literally swept us off the road, shivering and soaking into a disused ski lift station. Even Ligita’s ukulele playing couldn't cheer us up as we huddled together, Szuka looking thoroughly fed up at the prospect of a soggy night in the tent. The forecast the next day was still dire, so we discovered one of the joys of bicycle travel-putting your bike on a train!

The other side of the ‘spine of the Alps’ the weather was significantly better. And after our emergency escape from the Lakes we decided we needed some city time, so headed towards Graz, the vegan capital of Austria.The city was a little subdued with bars still closing at 11pm and many small businesses still bordered up. Nevertheless we were excited as we had heard the border to Slovenia was opening in just a few days. We gorged on vegan food (not as good as Becca’s cooking, the chef at MoaAlm), and made our plans to head south.

The Slovenian border post was deserted. We were full of anticipation, expecting thorough checks at the border, instead we were shocked at the lack of checks and were simply waved on through by a scruffy looking policeman after the briefest glance at our passports. We cycled extremely quickly away from the border convinced we had been let in by mistake and set up our first wild camp in the hills of Slovenia. Slovenia and its people greeted us with their familiar friendliness and as we drank blueberry schnapps with a local hut keeper above the hills of Maribor, we learnt more about how the Covid crisis had affected Slovenia and its people.

We took mountain bike tracks, muddy 4x4 roads, and Eurovelo cycle paths to wind our way through the hills of Slovenia and entered Croatia through a small border on a river. This was bear country and we tried not to be worried setting up our tent on the river bank and cooking our pasta! A few more mountain passes and a long free wheel to the coast we finally reached the crystal clear waters of the Adriatic.

The Croatian islands were relatively deserted, and we enjoyed watching locals drink coffee and fish in the harbours normally overrun with mega yachts. We were able to pitch our tent in secluded coves, on beaches and olive groves as we settled into the easy swing of island living. We cycled single track mountain bike trails, endured numerous punctures from tiny spiky thorns and hopped from island to island using the great ferry services. But although we enjoyed the lack of crowds, the local stories made us hope that fellow holiday makers would begin to make their way back to the coast. Many people on the islands rely on tourism as their only source of income, and the Covid19 crisis has left many without a way to support their families.

Despite having to endure our constant company for three months of lockdown, Xania and Craig welcomed us graciously to their beautiful island home. Zora and Szuka were elated to be reunited and spent their days sunbathing and paddleboarding together. We were super excited to be in Vis after hearing so  much about it, and it did not disappoint. We enjoyed amazing kayaking to the green cave, mountain biking to remote spots on the island, as well as swimming and snorkelling in the crystal clear waters. We were lucky to have Craig and Xania guide us around the island to the most secluded beaches and special spots. Coffee in Komiza was a highlight, especially when Ryan started drinking Aperol at 11am!

Reluctantly, we had to say goodbye to the coast, a comfy bed and delicious food and begin to head North back to Osttirol. We returned to the bikes, heading inland towards the National Parks of Croatia. We travelled through forested hills, stopping to swim in gushing rivers to escape the building heat and fought our bicycles as they succumbed to one puncture after another. Slovenia welcomed us back with heavy rain and we were excited to reach Ljubljana and take shelter before our final adventure of the trip in the beautiful Soca valley.

Many people are questioning travel at this time and we definitely don't want to appear naive to the risks of travelling during Corona times. We were welcomed warmly throughout Austria, Croatia and Slovenia as people tried to get their businesses moving again. We  tried to  stop often in cafes and buy local produce where possible, and of course followed all the necessary measures to protect ourselves and others. We enjoyed the travel at this time due to the empty beaches and national parks, but we were dismayed by the obvious severe impacts the lack of tourism was having on small communities.

Writing this back at MoaAlm we are grateful that our season, although late in starting is well underway and busy. Thank you to all our guests for supporting us at this time. We look forward to seeing you soon in our beautiful mountain home!

Like the sound of our travels. This journey can also be done by car or public transport. Why not spend a week with us in MoaAlm then head South towards Vis? For those of you with a bit more time on your hands, or after an epic post covid holiday, we would be happy to help you arrange your travels.