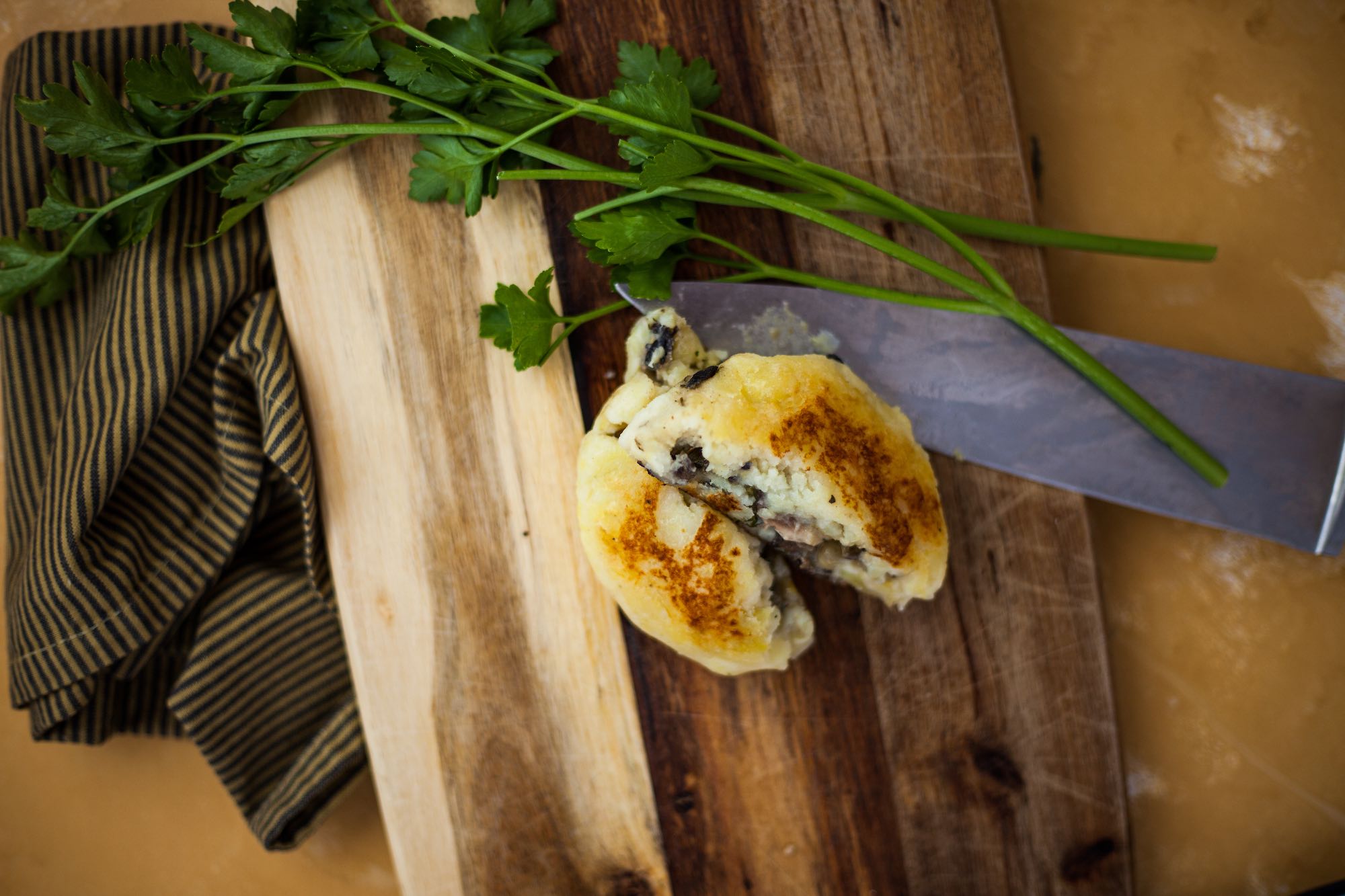 Ligita, our plant based cook at MoaAlm in the Austrian Alps loves lots of things! This recipe for potato patties, stuffed with mushrooms and Chimichurri sauce is so versatile and very popular with us all at WearActive after a day playing in the fresh snow ..

"Being Eastern European I am absolutely in love with potatoes, and who wouldn’t be? I feel like our ancestors and many cultures were very creative with the few vegetables they had, especially in the Northern European regions where people used to have such a limited amount of fresh vegetables.

Here in the East Tyrol region of Austria, potatoes also are one of the main ingredients for many local Austrian dishes. When skiing and snowboarding on the piste, a hearty baked potato is the perfect meal. People in Austria experiment with different types of cooking, shapes and textures.

Potato as a vegetable is quite fascinating. It is native to the Andes, likely somewhere in present-day Peru or Bolivia. Potatoes were domesticated approximately between 8000 and 5000 BC.

Today, the potato is the fourth most important crop worldwide (after rice, wheat, and maize) and the world’s most widely grown tuber crop.

There are about 5,000 varieties of potato including common commercial varieties, each of which has specific agricultural or culinary attributes.

Potatoes are a very good source of vitamin B6 and a good source of potassium, copper, vitamin C, manganese, phosphorus, niacin, dietary fibre and pantothenic acid.

I would like to share a new recipe for mushroom filled potato patties that have been popular here at the MoaAlm Mountain Retreat. Delicious and easy to make"

To make around 8-10 potato patties you will need:

First, peel and boil potatoes. Set aside to cool down and mash it with salt, pepper, milk and flour.

Then prepare the mushroom filling. Saute onions and garlic for a few minutes and add the mushrooms, mustard and pinch of salt. Once mushrooms are reduced in size,, add the fresh dill and mix it all together. Put it aside.

Once the potato mash is cool, form 2 round shapes (burger type), add the spoon of mushroom filling in between and then ‘glue’ it together with your hands. Make sure you make them not too fat a shape, as it becomes harder to put the filling in. Once the patties are formed, heat up the pan with a splash of oil and fry until golden on both sides. You can eat them straight away or keep it in the oven for around 30 minutes on low heat until ready to serve.

We like to serve Mushroom Filled Potato Patties with Chimichurri sauce which adds extra zing.

For Chimichurri sauce you will need (makes a small jar of sauce):

• Half of red onion

Put parsley in the food processor, the thinner it gets the better, we normally process it for around 2-3 minutes on max speed. You want to get nearly the paste out of it. Alternatively, if you don’t have a food processor, just cut it very finely.

Then finely chop onion and garlic, mix it with parsley, vinegar, oil and salt and shake it in the jar. Keep it refrigerated. The sauce can keep 2-3 days in the fridge. Nice and zingy!

Enjoy! If you are interested in similar vegan recipes, why not take a look at our Baked Potato Samosa or our Thai Sweet Potato and Sweetcorn Patties.

Also if you are looking for a winter holiday that involves morning yoga, snowshoe hiking, skiing or snowboarding in the Austrian Alps, check out our website.